The cruel and heartbreaking reality of obstetric fistula following stillbirth was truly brought home to me by one extraordinary woman – Dr. Catherine Hamlin.

Nominated for the Nobel Peace Prize and holder of innumerable awards, Catherine devoted her life to treating this devastating medical condition in the belief that one day it would be eradicated forever.

Eight years ago, I had the honor of meeting Catherine in Zurich at a talk organized by GreenLamp. There can’t have been more than 30 of us, packed into a small room, eager to hear this world-renowned doctor speak of her life and the challenges she faced in Ethiopia.

A tall, slim, soft-spoken woman, at that time 90 years old, she had an inner strength and energy based in love that cradled us gently as she described the grueling existence of an obstetric fistula sufferer.

She also described in detail what her daily work as a doctor entailed and how we could help her make a difference. 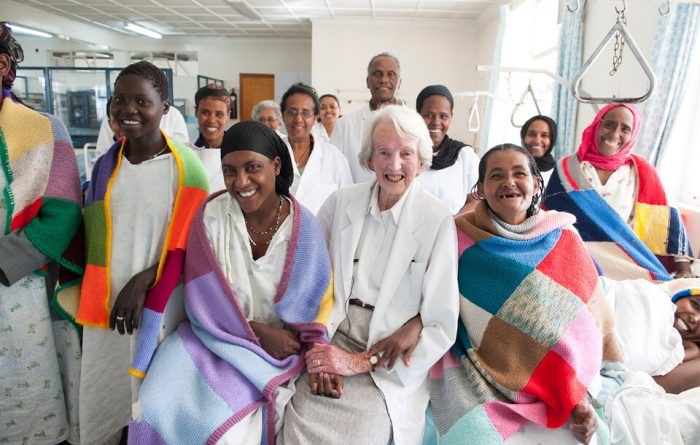 So, first things first – what is an obstetric fistula?

An obstetric fistula is a hole between a woman’s vagina and her urinary tract, and sometimes also her bowel. It happens as a result of prolonged, obstructed labor when the sustained pressure of the baby’s head on the pelvic bone irreversibly damages the mother’s soft tissue.

‘Prolonged’ in these cases means anything up to seven days’ labor. The lack of blood flow to the pelvis area results in necrosis leading to the development of a fistula (hole).

This in turn results in constant incontinence (often both urinary and fecal leaking from the vagina) which leads to social segregation, shame, and serious health problems.

Women and girls who suffer this injury are most often forced to live in huts separate from the rest of the village, usually in appalling conditions.

This is because they smell. They are considered a burden on the community.

These girls and women live like this for the rest of their lives even though surgical intervention could save them from such existence.

Obstetric fistula has been described as the leprosy of the 21st century and to hear of these women’s lives, I have to agree. It’s the disease of the poor woman and poor girl in developing countries.

They lack the money to access emergency medical services. It’s inconceivable to us in the West that a mother should not only suffer the loss of her baby after prolonged, excruciating labor but thereafter also be cast aside through no fault of her own because of an internal injury.

Yet the cruel consequence of stillbirth, when followed by incontinence, is that she must survive hidden away from society in desperately poor and unhygienic conditions, with the associated psychological trauma, ensuing depression, and illness that follows.

Every year it’s estimated that between 50’000 and 100’000 women worldwide are injured in this way. They then ‘disappear’, pushed as they are to the outermost fringes of society.

Current statistics from Asia, Latin America, and sub-Saharan Africa put the number of women who currently live with an untreated obstetric fistula at 2 million.

But the number of affected women is most probably far higher because these figures are based only on the number of women who seek medical treatment.

Yet obstetric fistulas can be prevented and in most cases treated through surgery. An expert fistula surgeon can repair the hole through reconstructive surgery with successful closure rates as high as 90%.

In many cases, where the injury is not of a complex nature, the surgery can take as little as 60 minutes. And the average cost for this surgery, including post-operative care and rehab?

Yet for families in developing countries, this sum is prohibitive and so remains out of their reach forever.

The WHO has announced 23rd May 2019 the International Day to End Obstetric Fistula in a bid to raise global awareness and support the eradication of this medical condition.

Which takes me back to why I was listening to Catherine Hamlin on a grey winter’s day in Zurich. I had read her moving book The Hospital By The River and knew that, if ever I had the opportunity, I wanted to meet this incredible woman. Her story was one of dedication, love, and hope.

Rarely had I read something as inspirational and beautiful. When she finished her talk, I was lucky enough to sit with her alone and hear more about her work, her patients, and the difficulties she faced in covering the medical and midwifery training costs at her hospital and college of midwives in Ethiopia.

She explained about her grueling fundraising travel itinerary which she’d undertaken in order to spread awareness and bring in cash.

To be in her presence was to believe that positive change was possible.

Her selflessness and commitment, and her gentleness and compassion were heartrending and utterly compelling.

This year marks 63 years since Catherine and her husband Reg Hamlin traveled as young doctors to Ethiopia from Australia.

In 1959, the newly married couple accepted a three-year contract to work in Addis Ababa as obstetrician-gynecologists. They were to work with patients and set up a midwifery school.

Neither had ever seen an obstetric fistula case before and they quickly realized how much there was to do and how desperately their medical help was needed. On completion of their contract, they decided not to return to Sydney.

They had fallen in love with the country and its people, and they wanted to stay.

Since then, over 60,000 women have received free treatment at the hospital and maternal healthcare in Ethiopia has been changed forever.

The setting up of the midwifery school has been instrumental in reducing the incidence of obstetric fistula.

The women who study at the center undertake a four-year Bachelor of Science degree and then return to the rural communities to work as midwives. They are all on full scholarships funded by donations.

Training midwives is an essential part of fistula prevention in a country of 90 million where there are only 7000 midwives. In the last three years, these midwives have successfully delivered over 40’000 babies.

Even more amazing is the fact that when one of these trained midwives starts to work in a rural area, incidents of obstetric fistula practically disappear.

Yet there is still much to do. As Catherine stated:

“My dream is to eradicate obstetric fistula. Forever. I won’t do this in my lifetime, but you can in yours.”

Her’s and her husband’s story is a deeply moving one. The Hamlin organization short video “A Lifetime Of Caring” tells of their life’s work.

How You Can Help

It’s the marginalized, illiterate, poor women, often living in rural communities, who most suffer from this preventable injury and it’s them that need help.

The Hamlin Foundation’s webpage www.hamlin.org.au not only sets out the work of the hospital but also showcases products that can be purchased online.

Many of these beautifully crafted gifts are made by the patients themselves as well as women from other communities who through their work are now able to support themselves and their families.

The UNFPA Campaign To End Fistula also has a video that illustrates the scale of the global problem. Information is key.

If we know about obstetric fistula then we can help to eradicate it forever.