Over the Easter weekend, we as a family celebrate in our own secular, non-churchgoing way — an early morning chocolate egg hunt followed by a big breakfast featuring a bunny-shaped bread and Easter egg tree. Our family has passed this Swiss tradition down from one generation to the next. It’s without a doubt my favourite annual ritual, beating Christmas stockings hands down. Yet adherence to the Christian calendar doesn’t make me a believer. This meant that when my son was killed I was frightened and alone in my despair. At times I envied those with a cast iron faith because I, on the other hand, had no altar at which to lay my aching soul. 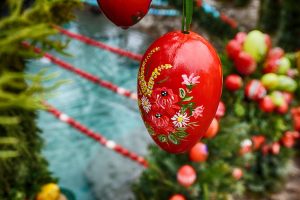 It would comfort me if I was certain that my son inhabits the spirit world but I simply don’t know. I wish I did because truth is, I miss Alex desperately and it would help me if I believed that an ethereal angel-like version of him watches over me as I go about my day. But scientific predictions in quantum mechanics and the laws of thermodynamics dissolve my chance of being a worshiper, and so I fail to see my son as a celestial being like those depicted on a crumbling Renaissance church wall.

The child I’ve buried may not have wings, but that doesn’t mean I don’t talk to him because I do. I regularly catch myself asking him something in a natural act of motherly love and then stop short as I again question my own belief system. In those moments I’m left teetering on the edge of emotional angst, unsure as to how to knead together what I feel in my heart and what science tells me. It’s a tough balancing act, with no guidelines, no rules, no one to show me what’s what or why.

Science doesn’t help me to make sense of the unanswerable and religion doesn’t calm my gnawing doubts. Dealing with such thoughts makes my head spin and hurts my broken heart. That I don’t understand how it all fits together — eternal life, dark matter, the creation story, the multiverse — is not surprising because, as far as I can see, neither does anyone else. Is there a cosmic force? A divine plan? Are we part of a universal consciousness? Am I and my son, and everyone and everything connected on some quantum level, entangled throughout space-time whatever our physical state? If no energy gets created in the universe and none is destroyed, is my Alex still here, or there, or everywhere?

The fact is, I do believe in something even if that something is elusive and weird and physicists try but fail to explain it in formulas that I don’t comprehend. I sense that there’s more to IT all because I have experienced moments of presence, of connection, of instantaneous telepathy with my dying child. I believe it ain’t over when we breathe our last.

So I cling to my own evolving and undefined subatomic particle spirituality because without it I would have to accept that my child is gone forever. My son may be different now, pure energy perhaps, but I believe that something of his essence somewhere in some form still exists. I refuse to accept that my Alex isn’t vibrating on a bizarre alternative multidimensional level because given it’s possible, you can be sure that’s where he’ll be.

So here I am, a loss mother managing her grief within a self-made crucible of scientific knowledge and personal imagination. It’s a make-it-up-as-I-go-along type of spirituality which neither rejects other people’s faiths nor imposes a dogma on anyone else. We are none of us given the choice but to navigate this gruesome loss journey as best we can. Yet in respecting each others’ way of coping we’re able to live out the one universal truth that unites us all, and that is Love, possibly the strongest force in the cosmos and one which needs absolutely no explaining.