He was gone. Her son was dead. She screamed, her wounds of grief as lethal as the gashes on a hunted animal. Her cries reached up to the skies and down to the centre of the Earth.

And then she collapsed.

In the Underworld, the place where light dares not enter, where the gods and their mythical creatures and the souls of the dead rest, the Beast of Sorrow moved and raised its head. It heard her despair and was summoned.

After the shock, the horror, the realization of what had been done to her son, she felt herself fall. There was nothing to hold her. The Fiend opened its grotesque mouth and devoured her before she could catch her breath. Her soul was sucked into the abyss and with it her love for her child. 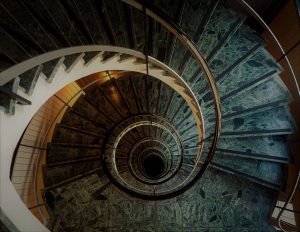 She watched herself leave the Upper World of the living and disappear into the darkness, unable to stop black terror wrap itself around her soul. Her descent into ever deeper despair strangled all hope and crushed her heart. Within minutes, all-consuming grief had condemned her to an existence in the abyss because she now belonged in the Underworld.

Katabasis — to journey to the land of the Dead whilst alive. She had descended to a place where she would have to face her own grief, her struggle with death, her own demons, her son’s loss.

There was no escape, there was no way out. If she peered down, there was no end to the blackness. Dreaded vertigo filled her stomach as if to look meant that she would be pulled even further down towards nothingness, an infinite cavern with no end. She understood instinctively that there was to be no reprieve from the suffocating agony.

The realization that death was forever, that it went on and on and on, and that she would have to learn to live without her son for the rest of her life, ensured that any light that could have penetrated the chasm was devoured by the unending sorrow.

This deadened mother was lost. Even though her love for her child was as intense as sunlight and as vast as the universe, she was kept in the darkness. Her feelings had nowhere to go because her child was dead. Her love was not transferable. How was she to live her life without living out her love for him? Better death than non-life, non-love.

She was instinct in its purest form denied. A mother without her child. A dead-alive soul.

The heinous Creature in the abyss smelled her tears and heard her cries and chose not to help her. It watched her wandering through her dreams, searching for her child in the Underworld, like so many others had done before her. It saw her seek her son in each illusion, in each memory, in every face, desperately looking for a trace of him however small. Her need to find him, to see his soul, to feel his presence, to hold him and to never let go filled her every thought yet the Creature remained impassive and cold.

At night, the mother visited ghosts within her imagination. Tortured by nightmares, she relived her child’s last moments. She pleaded with the Beast of Sorrow: ‘Please, please, tell me that he did not suffer!’

But the Beast of Sorrow did not reply. Month after month, he remained silent. He watched her with his blind red eyes, sniffed her agony and crawled further down into the chasm. 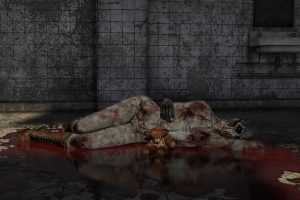 She was alone even as she wandered among the souls of the Dead. She was trapped in the Underworld, alive but not living. Nothing and no one could reach her.

Daylight was her torment, so darkness became her companion. She shied away from those in the Upper World filled with hope, joy, and light. Instead, she knelt on the cold, cruel floor of the abyss. Here she leant her head on the Beast of Sorrow and took comfort in knowing he would not abandon her. Her place was at his side where death was no stranger. It helped her realize she need not escape her new reality for here she was safe.

In the end, she realized, it was in the darkness where she would have to learn to live again. For it is only those who have lost a child who may journey into the Underworld. It is a journey that they must make alone.

And finally, she understood: if she learned to see in the darkness, she would one day be able to see in the light. Life and Death. Grief and Joy. Darkness and Light.

So, night after night, she fell asleep next to the Beast of Sorrow. One day, perhaps, she would find her way back to the Upper World, through regeneration and a rebirth, to the land of the living.

She would ascend out of the darkness and perhaps, at last, awake to the light of dawn.